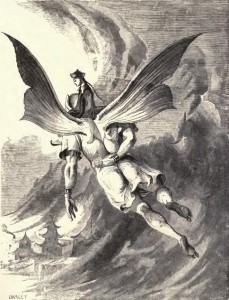 Aladdin and the Genie. Image courtesy of Wikimedia Commons.

One day, the city was attacked by the Sultan’s enemies. The Sultan appointed Aladdin as commander of his armies. He fearlessly engaged the enemy, and after a violent battle he put them all to flight. The Sultan declared a festival to celebrate the triumph and the love of the people for Aladdin continued to increase. Meanwhile, the Maghrabi magician discovered that Aladdin and the lamp were no longer entombed in the cavern. He traveled to Al-Kal’as, where he learned of Aladdin’s fame and fortune. Discovering the lamp was kept in Aladdin’s palace and not on his person, the magician began formulating a plan. He visited a coppersmith and had a set of lamps fashioned, which he began exchanging for old lamps in the streets outside Aladdin’s palace.

The Lady Badr al-Budur was sitting near the window when she heard the magician pass by. The princess exchanged Aladdin’s old lamp for a new lamp, not knowing the lamp was inhabited by a Jinni. Recognizing his prize as the enchanted lamp, the Maghrabi immediately left off his exchanging and fled the city. Rubbing the lamp, he commanded the Jinni to remove Aladdin’s palace to his own land in Africa, and it was done.

The Sultan awoke the next morning to find Aladdin’s palace missing. He immediately sent for Aladdin, who was on a hunting trip. The Sultan commanded Aladdin to be beheaded, but the people refused to allow the soldiers near him. Fearing an insurrection, the Sultan granted Aladdin a pardon. Aladdin agreed to a period of forty days to find his wife, after which time he would present himself for beheading.

Aladdin wandered aimlessly for two days. Despairing of ever finding his wife, Aladdin accidentally rubbed the ring on his finger, and the Jinni of the ring appeared. Aladdin asked for his palace and wife to be brought back to him, but the Jinni refused, saying that act depended on the Jinni of the lamp. Aladdin then asked to be taken to the land where his palace was now, and immediately found himself facing his wife’s windows.

The next morning, the princess gazed out her window to find Aladdin seated near the wall. When the magician was gone, she invited Aladdin to enter the palace by a private entrance. The princess told Aladdin of her lamp exchange and of the Maghrabi’s attempts to convince her to marry him. Discovering that the magician carried the lamp on person at all times, Aladdin began devising a plan to kill him.

Aladdin left the palace and exchanged clothes with a poor beggar in a neighboring city. When Aladdin returned, the princess invited the magician to her chambers for dinner, during which she put a sleeping potion in his wine. She then fetched Aladdin, who recovered the lamp and killed the magician. The Jinni transported the palace back to its original location, and Aladdin and his wife spent the night celebrating.

A short time later, the Maghrabi’s brother, also a powerful magician, learned of his death at the hand of Aladdin. Seeking revenge, he traveled to Al-Kal’as where he killed a local holy woman, Fatimah. Dressed as Fatimah, he began working the crowd beneath the walls of Aladdin’s palace. Wishing to see the holy woman, the Lady Badr al-Budur commanded Fatimah be brought to her. She offered Fatimah a room in the palace, which the magician quickly accepted. The magician praised the wonders of the palace, saying they lacked only one thing – the egg of a rukh hanging from the center of the dome.

When Aladdin asked for a rukh’s egg to adorn his palace, the Jinni flew into a rage, only pardoning Aladdin because of his ignorance of the Jinn’s reverence towards the great bird. The Jinni revealed the magician’s disguise to Aladdin, after which Aladdin pretended to have a headache. Fatimah was called and Aladdin killed the magician with his own dagger.

From that time on, Aladdin and his wife were free from danger. When the Sultan died, Aladdin was given the throne, and they lived happily and in peace until their deaths.

Permanent link to this article: https://www.operationbrainleak.com/aladdin-and-the-enchanted-lamp-part-iii/