Aladdin and the Enchanted Lamp, Part I 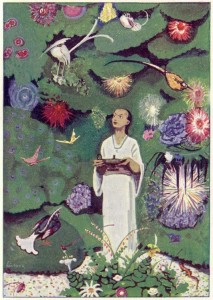 Aladdin in the Magic Garden. Image courtesy of Wikimedia Commons.

The Finding of the Lamp

In the city of Al-Kal’as in China, there lived Mustapha, a poor tailor, with his wife and young son, Aladdin. When Aladdin reached his tenth year, the tailor decided to teach him his trade. Aladdin was lazy, and whenever Mustapha left his shop Aladdin would sneak out and play with his friends. This behavior saddened the poor tailor, and he eventually sickened and died. Finding herself a widow, Aladdin’s mother sold the shop and took to spinning cotton into yarn to provide for herself and the boy.

When Aladdin was in his fifteenth year, a dervish from Maghrib came to the city. The dervish was a magician and astrologer who wielded great magic. He saw Aladdin playing in the street with his friends and thought to himself, “This is just the youth I need.” He questioned one of the youths about Aladdin, and after discovering his history, pretended to be the brother of Aladdin’s dead father. He gave Aladdin money and promised to visit him and his mother the next day.

The next day, the Maghrabi again found Aladdin in the streets and gave him money to prepare a supper for that evening. When he arrived for supper, the magician fabricated a story about his travels and enquired what trade Aladdin had learned to provide for his mother. Upon learning of Aladdin’s idleness, the magician offered to finance him in the merchant business.

Over the next couple of days, the magician toured the city with Aladdin, showing him the marketplace, the restaurants, the Sultan’s palace, and the gardens outside the city. When they stopped at a hill beyond the gardens, the Maghrabi told Aladdin to build a fire, and opened a chasm in the ground with magic. At the bottom of the chasm was a golden ring attached to a marble slab. The magician told Aladdin he was the only one who could lift the slab, behind which lay a great treasury.

Once the slab was raised, Aladdin entered the cavern with the magician’s ring on his finger and instructions not to touch any of the treasure until he had the lamp from the far chamber in his hands. While returning to the cavern’s entrance, Aladdin filled his pockets with all manner of jewels. Finding himself burdened by their weight and unable to climb the last step, he asked the magician for help. The Maghrabi told Aladdin to throw him the lamp to lighten his load, but Aladdin couldn’t reach it for all the jewels piled on top in his pockets. In anger, the magician closed the chasm, sealing Aladdin inside.

Realizing the magician’s deception, Aladdin set about looking for another entrance to the cavern. After wandering in the dark for three days, Aladdin discovered the Maghrabi had sealed all of the other doors by magic. He fell to crying and accidentally rubbed the magician’s ring. The slave of the ring, a Marid of the Jinn, appeared, offering to perform whatever task Aladdin required of him. Aladdin wished to be released from the cavern, and immediately found himself standing on the hill near the remains of the fire.

Rushing home, he told his mother of his adventure and showed her the lamp. They determined to sell the lamp to get money for food. When Aladdin’s mother rubbed the lamp to clean it, a Jinni appeared and declared himself the slave of the lamp. Aladdin requested food, which the Jinni quickly brought on gold platters. When they were done eating, Aladdin’s mother advised him to get rid of both the ring and the lamp, but Aladdin refused. When the food was gone, he took the platters and sold them in the market. This continued for some time, and all the while Aladdin spent his days in the market street learning to become a merchant.

This article originally appeared 28 May 2011 on mythsoftheworld.blogspot.com

Permanent link to this article: https://www.operationbrainleak.com/aladdin-and-the-enchanted-lamp-part-i/