Into Darkness: A Life-Long Trekkie’s Review 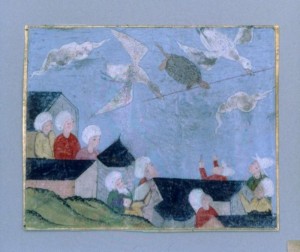 The tortoise carried by the geese.
Image courtesy of Wikimedia Commons.

While reading Indian Fairy Tales, I came across an interesting story from the Jataka. The story tells of a tortoise who lived in a pond in the Himalayas. The tortoise loved to talk, and he eventually became good friends with two young wild geese. One day, the two geese invited the tortoise to come with them to their home, in a cave on Mount Cittakūta.

The tortoise was willing, but he had no means of traveling to the cave. The geese told him that if he could keep his mouth shut and not talk to anybody, they could carry him there. The tortoise agreed, so the geese made him hold a stick between his teeth. Then they each grabbed one end of the stick and flew into the air.

They flew over the country in this manner for some time, until they happened to pass over Benares. The village children pointed and laughed to see a tortoise being carried in this manner. The tortoise, forgetting the geese’s instructions, opened his mouth to reply and plunged to his death below.

This story caught my interest because this wasn’t the first time I had read the tale of a talkative tortoise carried on a stick by two birds. Several years ago, I bought a book of Native American stories, and it contained an almost identical tale.

In the Native American version, turtle asked the geese to take him with them when they flew south. The geese liked turtle and agreed, on the condition that he couldn’t talk while they were flying. They knew turtle wouldn’t be able to keep his promise, so they decided to carry him on a stick by his mouth. That way, he wouldn’t dare open his mouth once they had left the ground.

One version of the legend claims that turtle was able to keep his promise and learned many new stories in the southern lands, as well as how to hibernate through the winter. Another version says that turtle kept his mouth closed until he could no longer stand it. He then opened his mouth to talk and fell to the ground. Luckily he wasn’t killed, but his shell was cracked, explaining why all turtles have cracked shells.

Permanent link to this article: https://www.operationbrainleak.com/the-talkative-tortoise/