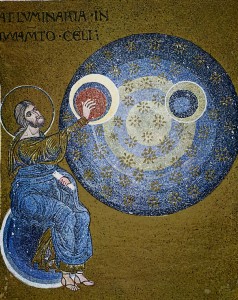 Most religious traditions contain some form of cosmogony, or creation myth, and Abrahamic religions are no different. The Book of Genesis opens with a tale of creation which provides an interesting look at the origin of the world.

Genesis says that God created the heaven and the earth in the beginning. When the earth was created, it had no form and everything was dark. God said, “Let there be light,” and there was light. God divided the light from the darkness, calling the light Day and the darkness Night. This division of light and dark became known as the first day.

On the second day, God created a firmament in the waters, dividing the waters above from the waters below. He called the firmament Heaven.

On the third day, God gathered the waters under heaven into one place, causing dry land to appear. He called the dry land Earth, and the water Seas. Then he caused the earth to produce all form of plant life.

On the fourth day, God created lights in the heaven to divide day from night. He first made the Sun, then the Moon, and lastly the stars, placing them each in the heaven in turn.

On the fifth day, God created all forms of ocean life, and caused all species of birds to come forth out of the waters. He commanded them to reproduce and fill the waters and the air.

On the sixth day, God created all forms of land animals, including humans, which were created in his own image. God gave humankind dominion over all other forms of life, and commanded all creatures to reproduce and fill the earth.

On the seventh day, God rested from the work of creation.

The next few verses offer what appears to be a second account of the creation, albeit in a different order.

God caused a mist to rise up from the earth, watering the ground and creating mud. From this mud, God formed the body of a man and breathed life into his body, naming him Adam. God planted a garden in Eden, and placed Adam in the garden to take care of it.

God saw that it wasn’t good for Adam to be alone, so he formed all the animals and birds out of the ground. He brought the all creatures to the man and Adam gave them names. Then God caused Adam to sleep. While he was sleeping, God removed one of his ribs and used it to create the first woman, Eve.

While most people accept the Genesis account as written, some scholars believe the creation actually represents two different traditions which have come to be merged over time, and in fact the first account shares many elements of Persian and Etruscan creation myths.

Another explanation is one offered by the teachings of The Church of Jesus Christ of Latter-Day Saints. Moses 3:5, in the the church’s Pearl of Great Price, says that God “created all things…spiritually, before they were naturally upon the face of the earth…for in heaven created I them; and there was not yet flesh upon the earth, neither in the water, neither in the air.” Thus, the first account of creation was a spiritual creation, and the second account of creation was a physical creation.

Permanent link to this article: https://www.operationbrainleak.com/two-biblical-creation-accounts/