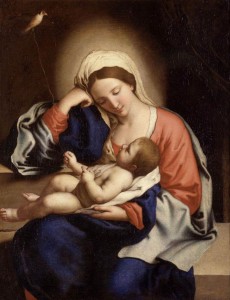 Aside from his birth and a brief incident in the temple at the age of twelve, the Christian Bible gives little information concerning the early years of Jesus of Nazareth. What events transpired during the family’s sojourn in Egypt? When did Christ perform his first miracle? While these questions are not answered in the biblical narrative, several pseudepigraphal Christian works give possible accounts from Christ’s early life.

According to the Gospel of Pseudo-Matthew, Jesus was around a year old when the family left Judea for Egypt. During the journey, they sheltered in a cave, which was discovered to be inhabited by dragons. Jesus climbed down from Mary’s lap and the dragons worship him, then depart in peace. The family often encounters wild lions and panthers during the journey, which also worship Jesus and leave in peace.

Three days into their journey, Mary rested beside a palm tree. When she expressed a desire for some of the tree’s fruit, Jesus caused the tree to bend toward her. When the hungry travelers had gathered all of the fruit, Jesus commanded the tree to raise back up and a fountain of water to gush from its roots to fill their empty water skins. When Joseph complained of the heat a few days later, Jesus shortened the remainder of the journey from thirty days to one day. They then visited a city in Egypt and entered a local temple, where all of the idols bowed to Jesus and then shattered into pieces.

After returning from Egypt, Jesus, age four, builds a system of pools which receive water from an aqueduct. When another boy smashes the aqueduct, Jesus causes him to die. The boy’s parents complain and Joseph entreats Mary to talk to Jesus. She convinces him to bring the boy back to life.

The fragmentary Infancy Gospel of Thomas, not to be confused with the gnostic Gospel of Thomas, gives an account of the five-year-old Jesus playing near a stream after a rainstorm on the Sabbath day. The water is muddy and the child commands the water to form tiny lakes and become clear again. He then molds twelve sparrows out of the mud from the rain. A nearby Jew sees Jesus molding sparrows on the Sabbath and hurries to tell Joseph. When Joseph rebukes Jesus for breaking the Sabbath, Christ performs a miracle and brings the sparrows to life. After the sparrows fly away, a nearby boy scatters the water in Jesus’s pools with a willow branch. Angry, Jesus curses the boy and he becomes withered all over. When the boy’s parents complain to Joseph, Jesus heals the boy, leaving a small part of him withered as a warning.

Another incident is told of a boy who bumped Jesus’s shoulder as he ran by. Jesus commanded the boy to go no further, and the boy fell down dead. When the people in the village complain to Joseph, Jesus curses them with blindness. The Gospel of Pseudo-Matthew omits the blindness, instead recounting that Jesus also brought this boy back to life.

A few days later, Joseph sent Jesus to a schoolmaster named Zacchæus. When Zacchæus attempts to teach Jesus the first letter of the alphabet, Jesus opens a book and teaches Zacchæus about the prophets. He then heals all of the surrounding people of their diseases.

Following these incidents, Pseudo-Matthew tells of the family’s relocation to Nazareth. While playing with some friends, one boy pushes another off a roof, and Jesus is blamed by the dead boy’s parents. He brings the dead boy back to life, and the boy clears Jesus’s name. The family then relocates to Jericho.

Now six years old, Jesus is sent to draw water at a fountain. His pitcher accidentally gets broken, and he carries the water home in his cloak.

A few years later, a family of lions make their home near the road from Jericho to Jordan, preying on unwary travels. Jesus visits the family of lions, and the cubs play around his feet while the older lions worship him. The villagers gather at a safe distance and Jesus rebukes them for not glorifying him when even the beasts recognize their lord. He then crosses the Jordan, parting the waters for the lions to pass.

Another incident is told of a couch Joseph is asked to make. Joseph gives his servant the exact measurements, but the servant cuts one piece of wood too short. Jesus tells Joseph not to worry, and he stretches the short piece of wood to the proper length.

The family next relocates to Capernaum, where lives a rich man named Joseph. This Joseph dies, and Jesus sends his father to heal him with a handkerchief. Joseph places the handkerchief on the dead man’s face and commands him to be healed by Jesus. The man immediately arises and asks Joseph who Jesus is.

The next move is to Bethlehem, where Joseph’s eldest son James is bit by a viper while picking vegetables in the garden. Jesus heals James by blowing on his hand and the viper dies.

While several of the recounted miracles fit in nicely with the Christ of the biblical narrative, others cast Jesus as a petulant mischief-maker, a far cry from the dignity of the sinless Savior of Christianity. Most of the childhood miracles are likely fairy-tales, composed for the benefit of those wishing to know more of Christ’s life, but there may be germs of truth around which the narratives are woven.

Permanent link to this article: https://www.operationbrainleak.com/the-childhood-of-christ/