The story of the twelve dancing princesses has appeared under various titles, in various forms, and by various authors over the years, but one of the earliest versions is the tale of “The Shoes Which Were Danced to Pieces,” published in 1812 by the Brothers Grimm.

There once lived a king who had twelve daughters, each prettier than the last. They all slept in the same room, and every evening when they went to bed the king locked the door to their bedroom. One morning when he opened the door, he found their shoes were danced to pieces and no one could tell him how it happened.

The king sent a proclamation through the country, declaring that whoever could discover the princesses’ secret should marry the princess of his choosing and become king after his death. If the applicant failed to discover the secret after three days and nights, he should lose his life instead. 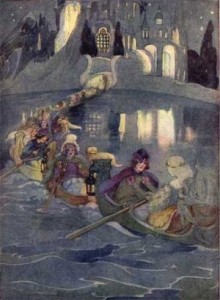 The princes and princesses rowing to the underground castle. Image courtesy of Wikimedia Commons.

Many princes tried to discover the secret, but each one lost his head. One day it happened that a poor soldier came to try his hand. On the way to the palace, he met an old woman, who counseled him not to drink the wine at evening. She also gave him a cloak which rendered the wearer invisible.

The soldier arrived at the castle and was welcomed by the king. At evening, he was led to his room, adjoining the princesses’ room, and the outer door was locked. The eldest princess brought him a glass of wine, which he pretended to drink, then he pretended to fall asleep.

When they were sure the soldier was sleeping, the princesses dressed in their finest dresses and put on their new dancing shoes. The eldest sister then knocked on her bed and it sank into the ground, exposing a stairway in the floor. The princesses descended, and the soldier threw on his cloak, following quickly behind the youngest sister.

The small group passed through several rooms filled with trees made of gold and silver. The soldier took a small twig from each room, careful not to be seen. Waiting beyond the last room was a small lake and twelve little boats, each crewed by a waiting prince.

The princesses stepped into the boats, the soldier hopping in beside the youngest. The princes rowed out into the lake, and soon a merry castle appeared on the other side. Embarking on the far shore, the group entered the castle and began to dance, dancing until their shoes were worn through.

Permanent link to this article: https://www.operationbrainleak.com/the-twelve-dancing-princesses/