Book Review: The Settlers of Catan 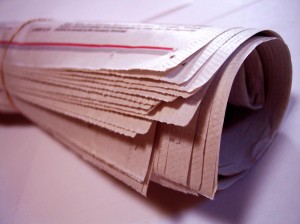 Photo by cohdra at Morguefile.com.

Carefully I took aim and threw the paper at the mat on the porch. It landed with a soft thud, barely heard, and I moved on to the next house. I did this several times before I was finished that day, and every day.

I was eleven when I got the paper route. My mother had heard that the Daily Herald was planning to start a route in my home town and the next thing I knew I had been volunteered to deliver. I never wanted a paper route. That didn’t matter to my mother. Apparently she felt that it was good for little boys to deliver newspapers. Since I never received an allowance it was nice to be able to earn money, but I still hated it.

I hated getting up at six in the morning on weekends, and biking for two hours after school on weekdays. I had better things to do. I hated being chased three blocks by dogs, which left me alone as long as I didn’t step one millimeter into their yard. But most of all I hated collecting the money.

It’s not that the customers were mean; they were just hard to catch at home. I remember many months giving my share of the money to the paper because I hadn’t been able to catch people at home. Add to that the fact that I detest asking people for money, and you get some glimpse of my predicament. My time was being wasted.

To be fair, I should mention that it wasn’t all bad. Besides the early mornings, the raging dogs, and the hard to catch customers, there were good things too. I remember delivering to an elderly man named Elmo. His wife passed away soon after I began delivering the paper, and he was very lonely. Whenever he saw me coming, he invited me in and offered me cookies or a fudge sickle. He couldn’t hear a word I said, but that didn’t matter. We had a good time just the same.

After about a year, I was tired of the paper route, so it became a family job. We bought our first trampoline with the money from that paper route.

Permanent link to this article: http://www.operationbrainleak.com/the-paper-route/