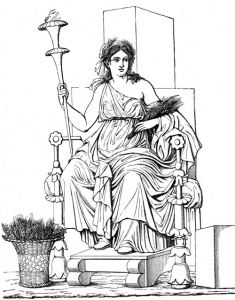 While reading the Egyptian myth of the death of Osiris, I was struck by the similarities in Isis’s search for Osiris’s body and the Greek myth of Demeter’s (Ceres) search for Persephone (Proserpina).

In the Egyptian myth, Isis searched the world for Osiris’s body, locked inside a casket. She discovered that the casket had been thrown into the Nile, where it was driven by the waves to Byblos in Syria. It had washed up on shore and a sacred tree had grown up around the casket, enclosing Osiris body in its trunk. The king of Byblos saw the tree, cut it down, and erected the trunk as a sacred pillar in his house.

Isis traveled to Byblos and, disguised as a common woman, found favor in the eyes of the queen. She was chosen by the queen to nurse the royal baby. Isis suckled the boy with her finger and every night she placed him in the fire. It happened one night that the queen discovered her son in the fire and pulled him out. Isis informed her that if the boy had only been allowed to lie in the fire for two more nights he would have been immortal. She then told the queen who she was and recovered Osiris’s body from the sacred pillar.

In the Greek myth, Persephone was kidnapped by Pluto (Hades). Disguised as an old woman, Demeter searched the entire earth trying to find her daughter. In her travels, she stopped at Eleusis, where she was welcomed into the king’s house and asked to nurse his son, Demophon.

Every night, Demeter placed Demophon into the fire in the family hearth, intending to make him as a god. His mother walked in one night and discovered her son in the fire. She snatched him from the flames, and Demeter revealed herself, telling the mother that Demophon would have been immortal had she been allowed to continue the ritual.

The many similarities between these two myths are too obvious for me to point out. One explanation for these similarities might be the proximity of Egypt to the Mediterranean world. In ancient times, there was quite a bit of contact between Greece and Egypt, and the myths of one culture may have been adopted into the myths of the other, just as the Greek myths were adopted by the Roman culture.

Permanent link to this article: http://www.operationbrainleak.com/isis-and-demeter/