My daughter’s school class is studying volcanoes and they decided to have a “Volcano Day.” Each kid was assigned to make a volcano, bring it to school, and cause it to “erupt.” Most of the kids made their volcanoes out of spray foam, but my daughter wanted to make hers out of clay. After some online searching, we found a quick and easy recipe for salt dough and decided to make the volcano out of that. 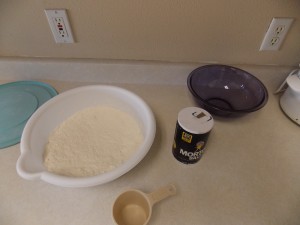 Mix the flour and salt together in a bowl. Gradually add the cold water and mix with a spoon. When the mixture becomes clumpy (not watery), knead on a hard, flat surface until the dough has a uniform consistency similar to cookie dough. 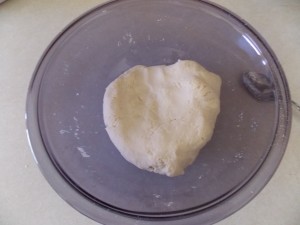 Salt dough can be hardened in the oven or left to air dry. Air drying can take several days, depending on the thickness of the dough. Oven drying should be done at a low temperature and can take several hours if the dough creation is thick.

After mixing a double batch of dough, we created the volcano’s magma chamber by taping an empty water bottle to a piece of cardboard. In hindsight, we should have used a piece of wood because the liquid from the eruption caused the cardboard to warp.

Once the magma chamber was in place, my daughter began forming the salt dough around the bottle in the shape of a cone. We realized almost immediately that the double batch of dough wouldn’t be enough to cover the bottle, so I began mixing up another double batch. I ended up mixing two more double batches before the volcano was finished. To fill in the cracks, I made a paste out of flour and water which we spread over the drying volcano.

We left the salt dough to dry for a couple of days, then my daughter painted and decorated her volcano. For the eruption, we used a mixture of vinegar and baking soda, dyed red with food coloring. 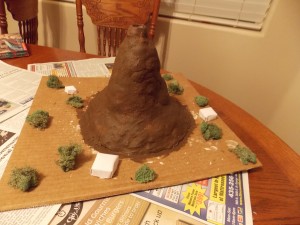 Permanent link to this article: http://www.operationbrainleak.com/how-to-make-a-salt-dough-volcano/