The Legend of Atlantis

When I was about five, my dad gathered my sister, her friend, and me together, loaded us into the station wagon, and took us to play tee-ball. I had never played much ball before; my dad never really had the time, but he thought it was time we learned. I remember walking to the plate, swinging at the ball, and hitting the tee right in the center. The ball fell off, landing a foot away from home plate, and the coach walked over and placed the ball back on the tee, only to have me repeat the experience. I don’t know if I ever did hit that ball.

Looking back years later, I understand that tee-ball wasn’t about winning or losing, it was mostly about sportsmanship. Some kids were good, some kids were bad, and there was me. I even went over to the coach’s house on Saturdays to work on my non-skills, but it was no use. No matter what happened, I didn’t seem to get any better. The girls could at least hit the ball.

I suppose I could blame my inability to catch on my plastic catcher’s mitt, but it would be a lie. At least I mostly played right field, where the balls hardly ever came. I think if the opposing teams had known of my handicap, I would have had to chase a lot more baseballs. As it was, I went home with my nose bloodied more than once from losing a ball in the sun. 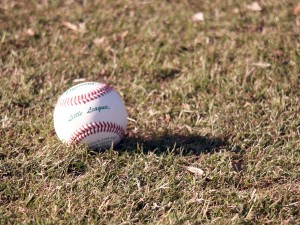 Photo by keyseeker at Morguefile.com.

No one ever told me I throw like a girl. They were too busy harassing me about not being able to throw from first base to the pitcher. I had no excuse for this. My bad catching I could blame on my mitt or the sun, my hitting I could blame on the height of the tee, but for my throwing I had no excuse but myself. To my dad’s extreme disappointment, I just wasn’t cut out for baseball, but I did get something out of the experience. For the next ten years the coach’s son and I were best friends.

Permanent link to this article: https://www.operationbrainleak.com/tee-ball/